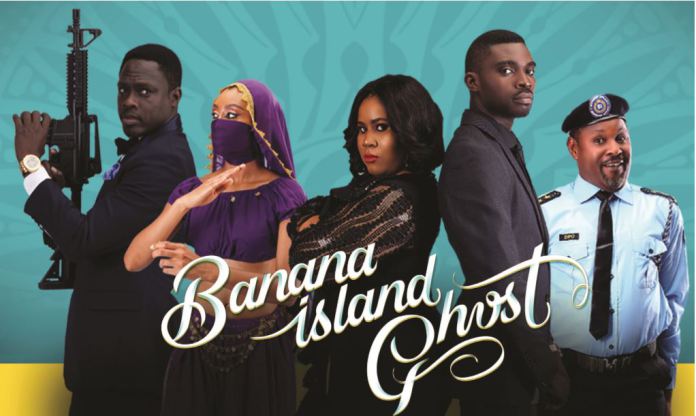 Banana Island Ghost is about Patrick Diabuah (aka The Ghost) who has been given three days by “God” to find his soul mate before leaving for heaven and he is matched with Ijeoma (Chigurl) who is preoccupied with saving her Banana Island residence from bankers who want to foreclose the property. Hilarity ensues.

For all you who thought that Chigurl was just a fluke, well you were wrong! Banana Island Ghost is the movie that announces her arrival into mainstream movies. Just like Frank Donga, Chigurl has made a seamless transition from skits to Nollywood. She was absolutely hilarious and I will agree with the description that she is Nigeria’s own Melissa McCarthy.

Still on the topic of funny people, I have to mention Akah Nnani who was the sergeant. That dude played a minor role, but whenever he came around, he had the audience in stitches. His collaboration with Saidi Balogun will leave you lolling all over the place.

This film was obviously made by geeks as you could tell from the attention to the production especially the CGI and the camera shots. There was so much emphasis on the CGI especially when it came to the Ghost or the fight scenes having perfect angles and curious camera shots and of course they couldn’t resist slipping in a ninja. The aerial shots especially the one on the 3rd mainland bridge were truly breath-taking and this brings me to the color grading of the film which was phenomenal with the producers successfully making Lagos look like the abroad. Honestly, you will not see a better production in a while to come.

Another thing this film got going for it is its marketing which has been top notch and has kept the audience engaged and anticipating the film.  Still talking about marketing, mehn I have never seen so much obvious product placement wawu! From Kilimanjaro to Cold Stone and even Coca-Cola and the geeky producers couldn’t resist the temptation to throw in a talking Kia vehicle. I know producers need money for films but we really need to learn how to do subtle marketing.

That said, the attention to the production was at the determinant of the real direction of the film which was the comedic aspect of the film.  I feel there could have been more funny scenes in the film but there were a few good laughs to get the film across the line. I don’t want to spoil it for you but my favourite was the laxative scene. Though the it’s clichéd you can never go wrong with a fart scene. Enough said.

I read a scathing review of this film and I don’t quite agree with it so please let me know what you think of Banana Island Ghost in the comment section below, or on my social media (FACEBOOK, TWITTER and INSTAGRAM.)