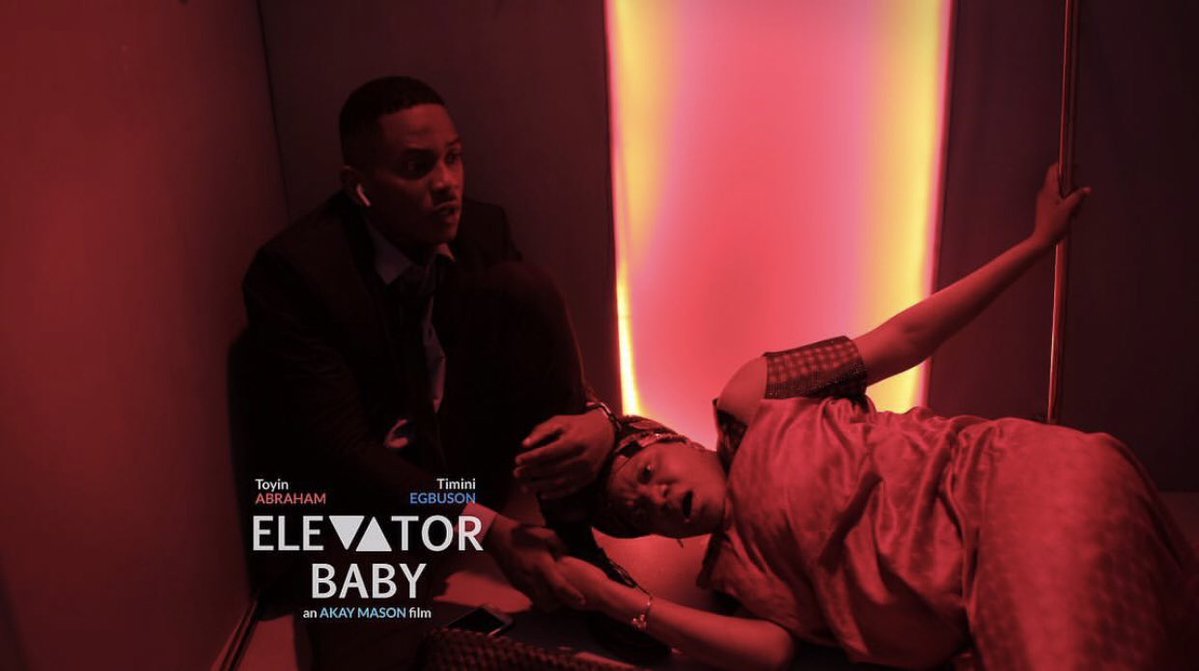 Elevator Baby stars Timini Egbuson as Dare Williams a wealthy spoilt kid with a fiery temper who gets stuck in a lift with a pregnant lady called Abigail (Toyin Abraham), an underprivileged and brash lady who unexpectedly goes into labor while in the elevator. Dare is left with no choice but to try and save both mother and child.

Let me start my review with a little bit of over sabi. Nigeria’s official language is British English and strictly speaking, Elevator Baby should have been called Lift Baby as the Brits say Lift and not Elevator to describe the contraption, But I guess elevator baby sounds better than Lift Baby right? LOL

Away from trivial naming issues, let me talk about the film itself. There has been a lot of hype about Elevator baby especially with Toyin Abraham and Timini Egbuson winning Best Actress and Best actor respectively at the 2019 AMVCA and getting to see the film, I appreciate that both put in good performances, that they however merit the awards is another kettle of fish. Quite frankly, Toyin is her usual slapdash character, while Timini is his usual ajebò kid. Maybe their usual characters is best suited in interpreting their characters hence the awards.

I like that the producers of Elevator Baby decided to build the set (the lift) rather than use a real one. This allowed them freedom to maneuver and manipulate the environment with camera angles and lighting which accentuated the mood of the scenes. That’s very creative of them. Kudos. Talking about the set, I wish that the set designers had used a glossy or sheen finish on the lift to make it appear more authentic as the set was obviously wooden. Also, the VFX of the falling elevator wasn’t as good as it looked cartoonish and the distance the carriage fell was way more than the height of the building. They should have paid more attention to the scale of the building to avoid that error.

In my opinion, Elevator Baby’s triumph is with the controlled and confined set and the novelty of its plot so if you are looking for something fresh, then Elevator Baby is the film for you. I commend Akay Mason for his directorial debut because he tried to keep the film engaging through its runtime.

Let me finish my review with another insignificant information about lifts/elevators. Lifts are fitted with automatic breaking systems with double fail safes that won’t allow the carriage to fall that height. Also, if the carriage plunged from the height portrayed in the film, trust me, the characters will have more than an unexpected labor to worry about. LOL

Elevator Baby is currently streaming on Netflix so I recommend you go see it if you are looking for a new direction in Nollywood. Please do leave a comment in the comment section below or on my Twitter or Facebook page and let me know what you think about the film or if you just want to talk about any other film.