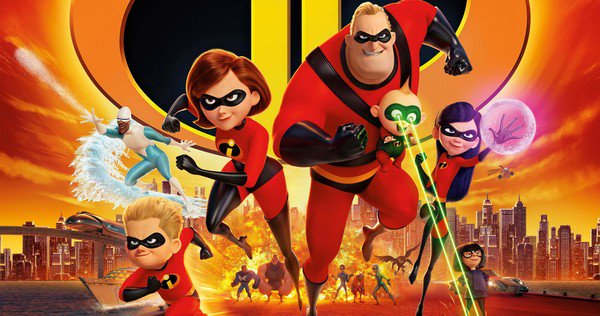 Incredibles 2 continues from where the first installment ended but this time, Elastigirl is recruited by a Telecommunications guru (Winston Deavor) to fight crime and make the public fall in love with superheroes so they can be legal again. However, while Elastigirl is fighting the villain named Screenslaver, Mr Incredible is facing his greatest challenge ever…managing the homestead!

So we waited 14 whole years and this is what they could come up with? Guys, Incredibles 2 was freaking awesome and worth the wait and even more. Unsurprisingly, the cinema had more agbaya adults than children – even though some adults came with kids as fronts.

I am so glad that Incredibles 2 lived up to the reputation of the first one because it was so delightful and so much fun with a lot of action and quite a bit of moral lessons thrown into it. I particularly liked that the producers have ridden the wave of feminism sweeping the world recently by projecting Elastigirl as the main character with all the other characters complementing her.

The plot was decent and entertaining with a lot of back story about children coming of age and family values being put in the forefront. The comedy was funny and didn’t seem forced and I particularly pleased that all our favorite characters reprised their roles. Samuel L Jackson was his usual crazy self, Mr Incredible was his usual lovable and endearing self while Edna was…Edna. However, my favorite character is Jack-Jack the youngest kid who while discovering his capabilities was a handful. My favorite scene is the encounter between Jack-jack and a raccoon which pushed me into hysterical laughter.

I don’t mean to oversell it but Incredibles 2 was Incredible (Pun Intended). However, don’t take my word for it so why not go see it for yourself? Do take the kids along because they will get a kick out of it too. Please feel free to drop a line in the comment section below or on my Twitter or Facebook page and let me know what you think about Incredibles 2.

PS. If you have photosensitive epilepsy or photosensitive migraine, you may need to exercise caution as there are a bit of flash photography and flashing images.