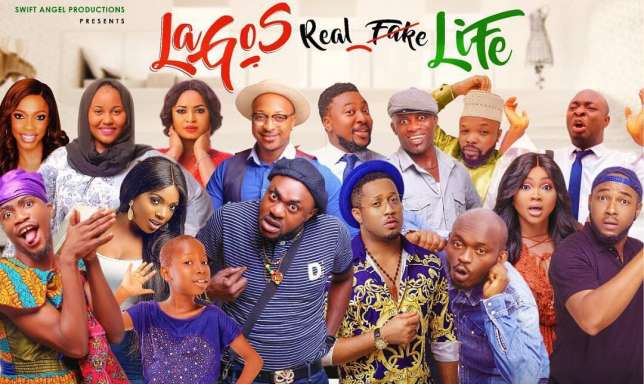 Lagos Real Fake Life tells stories of the bogus and phony lives of the residents of Lagos state, Nigeria.

With great reluctance and low expectations, I went to the cinema to see this film but despite my lowered expectations, I was still shocked by how subpar it was! Usually, for a production to be considered as a film, it would contain some semblance of a plot which would be conveyed by the film’s cast. However, Lagos Real Fake Life fails on this note as it had no real plot since the film was basically a mash up of Instagram skits. The characters were all over the place without any real direction that one doubts that this film was even scripted and not an improv or freestyle.

I have been branded a hater or bad belle person because of my dislike for such juvenile attempts at comedy but let’s be serious, in an industry that produced King of Boys, Sylvia etc. we are still making films like Lagos Real Fake Life, Brother Jekwu etc? I Can only think of 3 reasons why Nollywood makes such films:

Lagos Real Fake Life isn’t a film for me, but it may work for you so feel free to tell me what you think of it. Am I being too harsh or just like the characters in the film, am I also faking poshness? Let me know in the comment section below or on Twitter and Facebook.