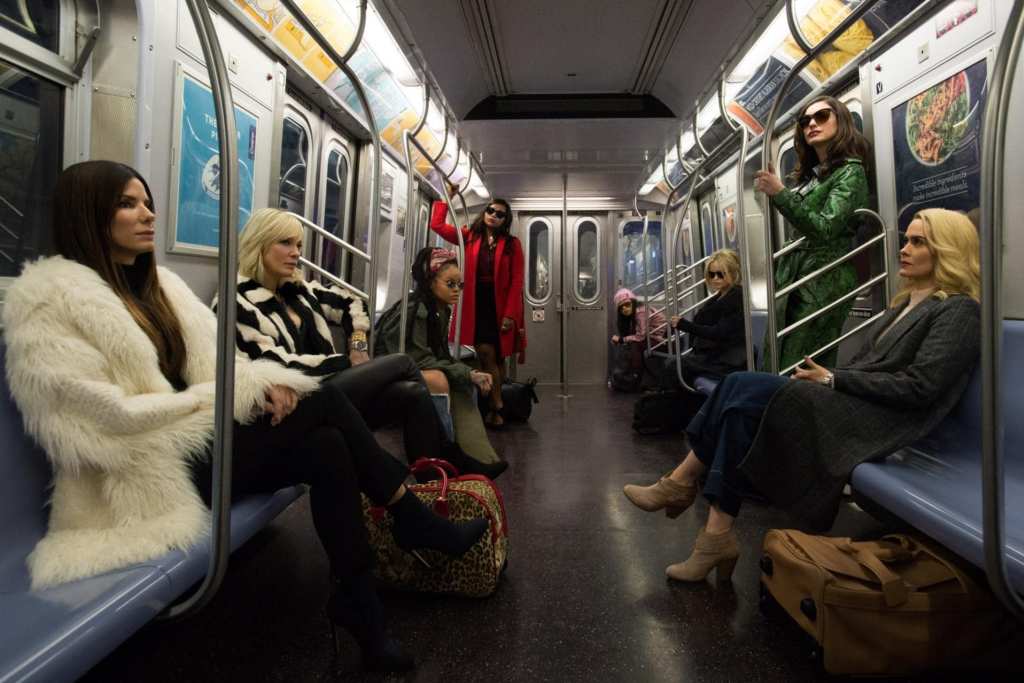 Oceans 8 stars Sandra Bullock as Debbie Ocean who for Five years, eight months, 12 days has been contriving the biggest heist of her life to steal a necklace fabled to be worth more than $150 million. To pull off this ambitious heist, she recruits a crew of specialists, including hacker Nine Ball (Rihanna), street con Constance (Awkwafina) and Lou (Cate Blanchett). Ocean’s 8 is an all-female cast Spin-off of George Clooney’s Ocean’s Eleven universe. However, the premise of this installment is that Clooney’s Character’s sister is the con (wo)man pulling off the ultimate heist.

I wasn’t expecting a novel plot because this film is an offshoot of another film but what I was anxious to see is HOW the plot will be executed. To that extent, Ocean’s 8 is quite entertaining. Sandra Bullock was suave and oozed of charisma to engage and carry the audience along. The other characters also put in a good shift as Rihanna gave a decent performance as a talented hacker and Anne Hathaway is convincing as a naïve celeb. Another plus for Ocean’s 8 is the humor of the characters without which this film would have come up as unexciting.

Though, it is a good thing that the producers deployed similar cinematography as the films predecessors, but honestly gave the film a feel of unoriginality. I understand that Ocean’s 8 is a sequel to Ocean’s Eleven but it just felt that the primary drive of the film was to appeal to female audience what with the best of fashion and designers strewn all over the film. This kind of alienated the guys from film but the women in the room were having a ball (pun intended).

Generally, Ocean’s 8 was entertaining because the ensemble had chemistry which gave the film a fun feel and the heist was well executed even though the attempt at a plot twist wasn’t as convincing since we all saw it coming from a mile off.

Ocean’s 8 is a good film for a girls’ night out or for date night so I can recommend it for the ladies and the guys will get a kick out of their women having the time of their life. Anyways, please feel free to drop a line in the comment section below or on my Twitter or Facebook page and let me know what you think about Ocean’s 8.

PS. The premier of this film at Filmhouse Cinema’s Lekki had a Met Gala theme so it was fun to see the outfits. However, when I got the call to attend the event, I thought the caller said the theme was a METH Gala, so let’s say I was inappropriately dressed. LOL.