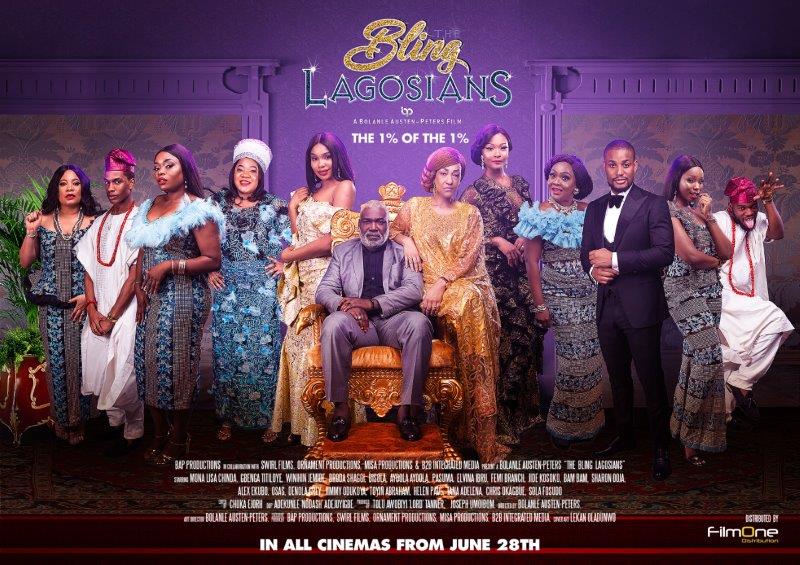 Revue of THE BLING LAGOSIANS

The Bling Lagosians is Bolanle Austen-Peters directorial debut and follows the story of the Holloway family, an affluent Lagos family who are currently planning a lavish 51st birthday celebration of their matriarch, Mopelola Holloway (Elvina Ibru). However, when the family’s business suddenly comes upon hard times that threatens to scuttle the birthday festivities, the patriarch Akin Holloway (Gbenga Titiloye) desperately struggles to keep up with the flamboyant lifestyle they are accustomed to while trying to keep the business afloat.

Firstly, I must commend the marketing efforts of the producers of The Bling Lagosians which culminated in the biggest movie premiere out of Nollywood that took place at Filmhouse Cinemas Lekki.

Immediately, I saw the synopsis and trailer for The Bling Lagosians, I could just imagine someone watching the success of  Crazy Rich Asians and thinking, Hey! I think we can replicate this level of wealth in a Nollywood film. To that extent I must give it to The Bling Lagosians because the level of opulence and flamboyance on display was unprecedented and over the top. All facets of the film including the locations, vehicles and attires reeked of pure luxury living and extravagance that pervades a family with unmatched wealth in the City of Lagos.

Furthermore, the cast did an amazing job portraying the well-heeled characters. I must specifically note the performance of Elvina Ibru who portrayed the archetypical upper-class matriarch with so much ease that she indeed became the character. Of course, Zaddy Gbenga Titiloye was an amazing “Sugar Daddy” and Denola Grey played a role he was always meant to play. Also, the comic relief was adequately supplied by Broda Shaggi, Helen Paul and Toyin Abraham but my standout support character will have to be Alex Ekubo who oozed of charm and wit. I was really impressed with his character.

That said, when a film spends so much money on marketing and focus on affluence and splendor the plot of the film suffers and that’s exactly what happened in The Bling Lagosians. The plot of the film was rather convoluted and the attempt to connect all the subplots at the end of the film didn’t exactly jive. A few loose ends were left hanging and this made the film feel unresolved and unfinished.

Lastly, in its quest to be over-the-top so many characters that were basically irrelevant to the development of the plot or had little or no input to the direction of the film were introduced. This led to a number of irrelevant or elongated scenes which impacted on the overall enjoyment of the film.

The Bling Lagosians comes to cinemas from 28th June 2019, so if ostentatious show of wealth is your thing and you liked Crazy Rich Asians, then The Bling Lagosians is going to entertain you but if you aren’t a fan of these types of films, then I suggest that you skip this one because the plot is rather hollow and unrealistic.

Thanks for dropping in on my blog, I really appreciate this. Is there anymore I can do to keep you coming back? Please let me know in the comment section below or on Twitter and Facebook.

TRAILER FOR THE BLING LAGOSIANS