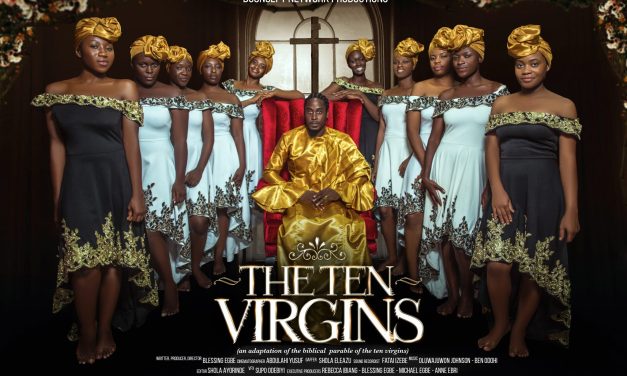 Revue of THE TEN VIRGINS

The Ten Virgins is an adaptation of the biblical parable of Jesus where ten maidens must stay steadfast in the face of temptation to await the return of the bride groom.

I must first commend Blessing Egbe for the courage to produce a musical drama in Nigeria because let’s be honest, Nigerians do not watch musicals (or faith based films) even if it is from Hollywood. I think with the limited resources available to her, The Ten Virgins was a fairly good musical and this is largely due to the cast of the film. The characters aren’t household names (understandably) but did a great job interpreting their roles and they are the acme of the film. I particularly liked how they managed to balance singing, choreographed dance and acting. All actors know that this is no mean feat and the cast of The Ten Virgins put in a very good shift.

Also, I noticed that a many components of The Ten Virgins was influenced by and steeped in Catholicism. This influence featured in the songs, costumes and even the location. This isn’t a bad idea because it gave the film a unique and Orthodox and traditionalistic feel.

The thing with musicals is that their enjoyment is more in the technicality of it and are not as apparent. By this I mean that to enjoy a musical involves looking beyond the surface and concentrating on the technical aspects of it including how the music develops characters and even the narrative of the film. Other that the music, the development of a musical is also enhanced by the quality of the cinematography and the plot expansion process. Unfortunately, the producers of The Ten Virgins showed a lot of naivety in methodical production of the film. For one, when one watches a musical, one expects a lot of original songs but many of the film’s score are songs that are well known. Though there were a few original scores, they just weren’t enough.

Despite the plot being one that is widely known, the producers of The Ten Virgins managed to adapt it by infusing some new angles in the film’s development. They attempted to put in a new spin to an old tale and this is commendable but sadly, this led to an inclusion of some irrelevant scenes. The producers felt obliged to make the film lengthy as many musicals are wont to be but this made stretches of the film a bore fest. Since the plot is one that is well worn, the producers should have condensed everything into a 1hr 10 min film that will keep the audience interested till the end but unfortunately, they lost their way midway into the film.

The Ten Virgins is a fair attempt at a musical, however I fear that it may not make as much money because the film’s enjoyment involves looking below the surface. I advise that this film be further adapted for stage where people who can appreciate live singing will have access to this story rather than cinema which isn’t the best medium to showcase it. So I am forced to say that  if you are the average movie goer who wants obvious entertainment, The Ten Virgins isn’t for you. However, if you have a choral background, or if you are more into technicalities of film, you may get some enjoyment from this film.

TRAILER FOR THE TEN VIRGINS