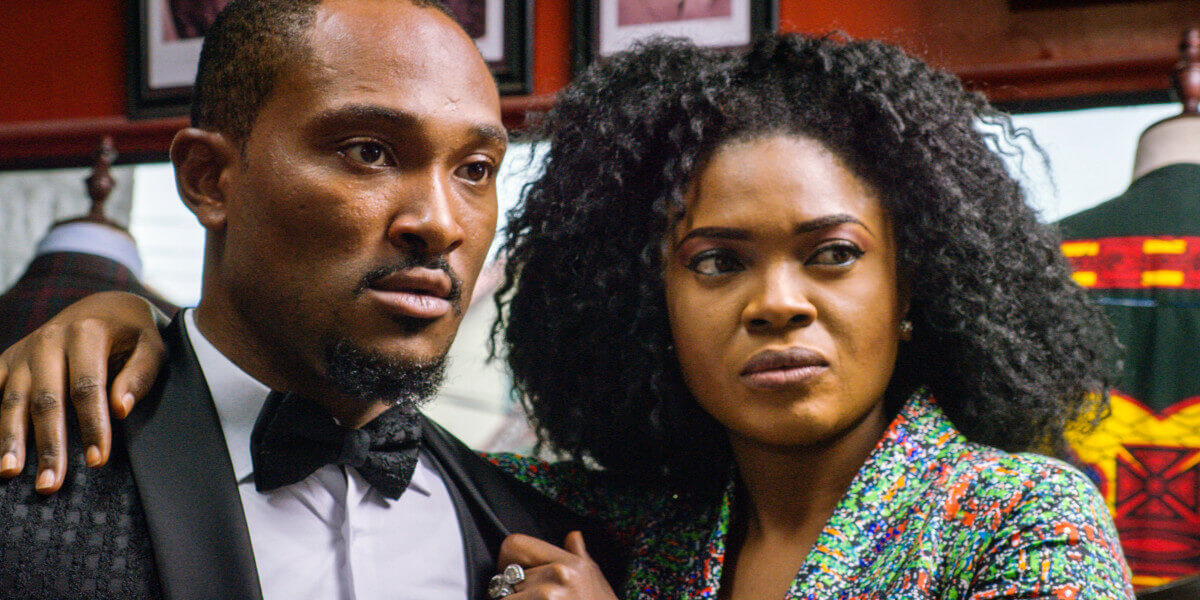 A few years ago, the name ‘Omoni Oboli’ was added to the growing list of female directors (or better still, filmmakers) we have in Nigeria. Fast forward to the present and basking in the success of her films so far, including the comedy, Wives on Strike, she released Okafor’s Law, which has generated a lot of publicity, primarily due to the controversy surrounding it. I finally got to watch this, courtesy of Maveriq of tharevue.com and I appreciate the platform for this opportunity. I must say that Maveriq’s got something good going on here. Good job!

Now to the movie. Okafor’s Law surrounds the story of three friends, popularly known as the three C’s. The most notorious of the three, fondly nicknamed, Terminator (Blossom Chukwujekwu ) makes a bet with the other two to sleep with three of his exes; this is in a bid to prove the theory of the infamous Law that if you slept with a girl once, you can do it again. Of course, this feat is quite unachievable… or so we thought.

I must say that the writers and the director wasted no time in introducing the protagonist and his playboy antics to us; no better way to introduce a badass of his nature like him shagging a bride-to-be. His theory and what he lives by is also introduced in this scene and further emphasized when he met his friends. The story onwards was as smooth as silk for me, dishing out drama and humor in equal measure. It was clear as day though that the Terminator is on an adventure that would change him for good (losing one or two points on predictability for me), but the question was how? There were parts of the story I did not see coming, especially Omoni’s character. The protagonist’s feelings for his last prey though did not sit well with me; neither did the climactic scene either. Like I said, maybe it’s just me.

The direction of the movie was quite lovely, so was the cinematography. Maybe it’s the cinema, but the sound was not, so… The score was also decent though. The performance of the actors generally was praise-worthy. Blossom Chukwujekwu was very convincing as the protagonist; Gabriel Afolayan’s take on an Igbo man was brilliant. Ken Erics held his own. RMD as the wealthy husband to Iffy was OK… until his confrontation with Blossom. He hit the ball out of the park with his performance. The ladies were equally convincing. Omoni as Ejiro was nice, Toyin’s foray into a corporate lady was OK; Ufuoma as Iffy was good. Other actors, including Kemi Akindoju and Mary Lazarus were all good.

For me, the direction was smooth. The picture quality was king. The story’s characters to a large extent had depth. I had no problem with the ending, but I left wishing that few of its loose laces were well tied and knotted before its resolution. It’s still a good picture anyway and I will rate it 7/10

Not sure of the movie, well here is another revue, this time by Aden @MizTallgirl

I’ll admit that the whole court drama attached to it made it more enticing to watch, plus Ufuoma was at the cinema to guide us all in the right direction. Lol.

In the manner we give feedback at work, I’ll give my three cents under these three headings:

Variety in the cast. Popular faces, but we’d never quite seen them together in one movie before.

I won’t talk about Omoni and Ufuoma because I’ve always considered their acting super, but Toyin Aimakhu shone some! I mean, looking past the halting English and the hint of omo ìgboro underneath, she did really well.

Even that was a plus, because the friend I’d gone to see the movie with agreed with me that it implied a grass to grace story for her character, and was true to the reality. There are women in the corporate world who indeed speak that way. It’s great to see her stepping out of a Yoruba movie, making us see her in an entirely new light.

This is the first movie I’d be seeing Mr. Chukwujekwu in a lead role and I’m impressed! I’d figured him to be one of those buff and handsome actors with no real talent beyond looking pretty and speaking grammar.

The scene between RMD and Mr. Chukwujekwu was excellent. It hit all, all the right notes. You could see why RMD is a legend and the greatness Blossom could achieve if he played stronger characters in movies, not just the typical urban upwardly mobile fine boy.

Although the plot wasn’t original, the cast pulled it off in such a professional manner that one could almost forget it was familiar. There was even a moment or two of suspense, which is hard to do with such a story.

Their outfits (and makeup!) were not overdone, and each suited the occasion perfectly. Ufuoma’s clothes stood out though. Kudos to her, or whoever managed her wardrobe for the movie.

The Ls served to bros in the movie were worthy of #keepthechangebae. Ufuoma was particularly merciless with her one opportunity to serve hers.

The sex scenes were very classy. Not too much, just a hint or two, but no fumbling under covers for them. Well done!

The charity work done by the lead role. I especially liked that this was inserted because we all need to help others as often as we can. Yes, seriously. Having subliminal reminders can help speak to one or two people who could take it up.

What I thought didn’t go well:

Overdone plot. Surely romance can be found via tons of other means.

The camaraderie among the guys was poorly done. Some parts were overdone, some were simply fake.

I rolled my eyes at Tina’s motherly scenes. Bulky Wright killed it in Gidi Blues.

The injury scene. He could have been bleeding internally, given how damaging those kicks and blows looked/sounded. There’s no way that kind of hurt would be cured with paracetamol and a hot towel. It’s somewhat misleading.

Unnecessary scenes. A second scene for Gabriel and his wife, the spurned lover scene etc.

A strong, romantic story, with relationship difficulties, between Lagosians who aren’t already driving fancy cars and live on the mainland for once!

You think the movie is so much fun and you just have to see it?  Well why not beat the rush, jump the queue and get the movie ticket here

Thanks to both guest revuers for a fantastic job.