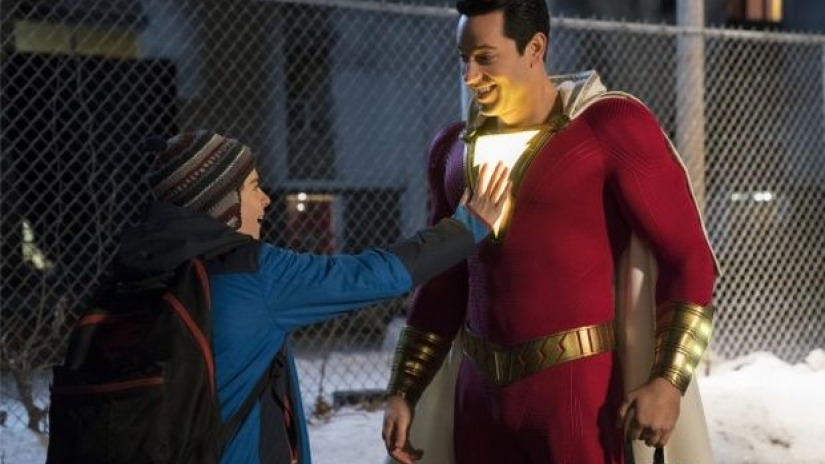 Shazam! Is about a streetwise 14-year-old foster kid (Asher Angel) who can turn into the adult Super Hero Shazam (Zachari Levi), courtesy of an ancient wizard (Djimon Hounsou). Still a kid at heart—inside a ripped, godlike body—Shazam revels in this adult version of himself by doing what any teen would do with superpowers – have fun with them! But he’ll need to master his powers quickly to fight the deadly forces of evil controlled by Dr. Thaddeus Sivana (Mark Strong).

Following the success of Wonder Woman and Aquaman and now Shazam, DC seems to have finally gotten the hang of light-hearted movies to do away with the darkness that previously pervaded the DCEU. I was sceptical going to see Shazam because super hero origin movies are tricky to pull off but I must say that Shazam is really good. You will not see a cheesier film in a long time but that’s not a bad thing because Shazam is literally a small kid in an adult’s body and Zachary Levi did an amazing job showing so much childish enthusiasm and exuberance doing adult things that every kid dreams of doing.

Other than the cheesiness, Shazam managed to get a good number of laughs from the audience especially when Levi was being his clumsy self. Also, Shazam has a lot of heart with the plot revolving around love for the family. For this reason it will appeal to audiences who want to come away from a movie with some lessons. The entertainment value of Shazam was further heightened by the villain (Mark Strong) who despite the light heartedness of this film was so nasty and villainous.

However, I must mention that Shazam did stretch for periods when nothing seemed to be happening. The film’s conclusion also didn’t go down well with me and gave me some Power Rangers PTSD.

Shazam made so many references to other heroes in the DCEU such as Superman, Batman, Wonder Woman and Aquaman and this may indicate that Shazam may just make it to the Justice League. By the way, when the film finishes I advise that you stay rooted to your seat because there are 2 mid/post credit scenes which you don’t want to miss.